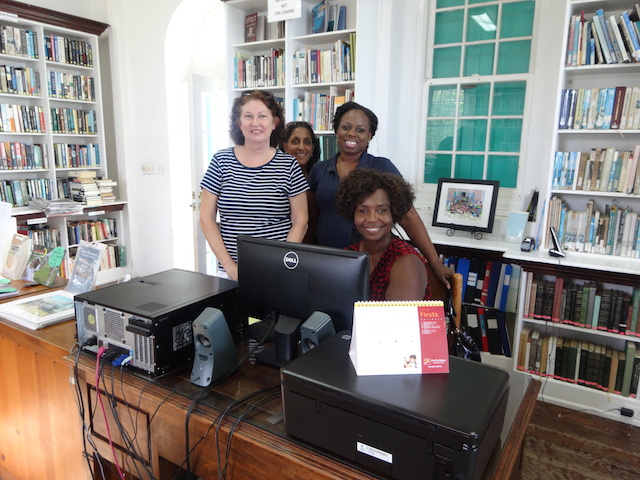 So next in my series Best of Eleuthera here is a look at Haynes Library in Governors Harbour.

The distinctive old pink building right on the harbour  is a real local landmark. It is a focal point for much of what is going on in central Eleuthera.

The government owned building was slated for demolition in the early 90’s – it had been empty for several years – previously it had been both the home and Doctor’s surgery in the early 80’s for Doctor Cliff Bacchus a well known and much loved figure around Governors Harbour.

The Library had been in planning stages since 1994 and was renovated and opened in 1996. Michele Johnson and Rosalind Seyfert who both had young children at the time were concerned citizens who saw the need for a local library and worked hard along with the late Tina Frost and many others to raise funding for the works.

Local contractors worked throughout the years of renovation to restore the building to it’s former glory.

Tina Frost was the treasurer of the fund raising and after her death the upstairs section of the library was named the Tina Frost Learning Centre in her honor. The Frost family very generously continue to support all the IT needs of the library in the form of computers…..

In 1999 there was a sizable donation from the Chace family which allowed the library to be finished.

The Haynes Library is so much more than just a library – it is a cultural, social and community centre – the needs of the local children are paramount in the program of events and are the focus of what is going on there.

Having said that there are events that attract adults as well – look out for the famous Doctor Seabreeze on Wednesday October 15th at 6pm talking about growing up on the island in his book Doctor Seabreeze’s Eleuthera – Growing Up on the Island.

Fund raising for many years was done through an annual silent auction and it was very successful. But 2 years ago a decision was made for a change to the source of funding – and so the fantastic Eleuthera All That Jazz Festival was born !

Check out this link to see some images of the festival…..

This a music festival that takes place over several days in March in central Eleuthera that both raises much needed funds for the library as well as awareness about the island of Eleuthera and awareness of the library and the fabulous work it does.  It has fired the imagination of many people who would not have otherwise been aware of who and what Haynes Library is.

Now for a quick look at the amazing staff who do the work – and how brilliantly as well. With love and enthusiasm and true dedication.

Rosalind Seyfert is the Library Director, she has been with the library since it was just a dream back in 1994 …. 20 years !

Althea Willie is the Children’s Librarian and has worked there for 12 years.

Tyika Moss has been the Assistant Librarian for the last 7 years …..

Michele Johnson – among her many and varied other roles is the President of the Friends of the Library – the fund raising arm which works so hard to keep the library going.

13,000 people pass through the library every year – about half of these are students – so the constant need for new books is great.

If you are visiting the island and would like to help a really great cause then please think about either making a financial donation – no matter how small – or alternatively bring some books – or one ! Children’s books are particularly important – to inspire a child to read a book , then another is the greatest gift to give them – the way forward for so many of us has been through reading about other people’s experiences, places we will never visit and all found between the pages of a book.

If you read my blog from last week you will know that I have a real passion for reading and for books and this is one of the best causes on the island so do remember to donate whatever you can ……..

The Haynes Library is partnered with the One Eleuthera Foundation – please have a look at what they to say as well…..