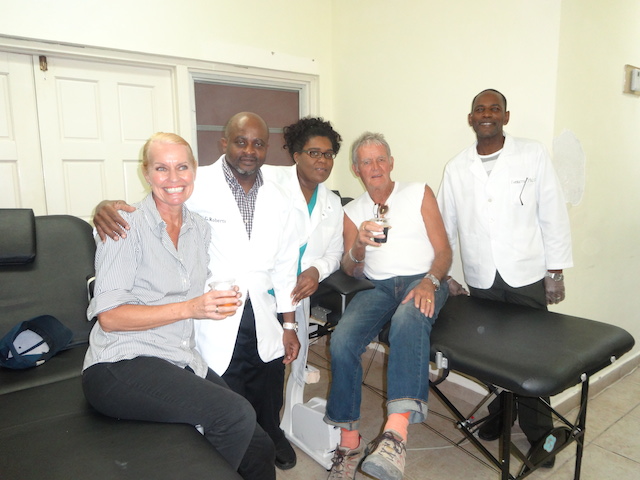 Donating blood here in Eleuthera is a very simple but vitally important process. Under the auspices of Chris and Alison Gosling – the two fantastic people who are at the heart of HACE – the Health Association of Eleuthera – the blood bank people come from Nassau twice a year for a blood drive.

This has been going on for about the last 12 years with Mr Everett Miller – the supervisor of the blood bank in Nassau – and Mr Glen Roberts – coming over to collect the blood.

In the past they have always stayed free of charge at Cigatoo Inn but this time they stayed – again gratis – at Pineapple Fields thanks to the kindness of David Barlyn.

An average collection on the 2 day blood drive in Eleuthera is around 50 – 60 pints – one exceptional time saw a collection of 96 pints !

The blood is returned to Princess Margaret Hospital In Nassau where it is thoroughly tested before usually being separated into 3 portions – red blood cells, plasma and platelets. It has to be used within 35 days so regular donations are vital. In Nassau there is normally a donation of around 30 pints per week – often they are in dire need. I was told that often if a young person has been injured in a fight or accident then family members will donate blood specifically for that family member – but then never be seen again !

Prior to the actual donation of one pint of blood the potential donor’s blood pressure, pulse and iron level is checked. On average 10 – 15% of potential donors – often the young girls – are denied being able to donate because they are iron deficient. So remember to eat up those dark leafy greens !

It is possible to donate blood every 8 weeks but of course we only have the opportunity twice a year in Governors Harbour. You need to weigh at least 110 pounds and be free from coughs and colds – plus not have had a tattoo or piercings for 12 months !

See the story below featured on the Blood Bank of Nassau leaflet. Many of you who live in Governors Harbour will recognize John Bennet who works on the Eleuthera Express boat – I have known him ever since we moved here 10 years ago – but I never knew his story.

Bob and I have donated blood ever since we moved here. Neither of us had ever done it before in the UK – but it is so easy and such a pleasant experience – you see friends and people you know and have a joke and a laugh – I just look away when they put the needle in I must admit ! – and it is followed with a cold Guinness or soft drink and a feeling that you have done someone somewhere some good…… And we all would like to think that blood products would be available to us should we ever need them…….

If you are here in Governors Harbour next March then do think seriously about making a donation.