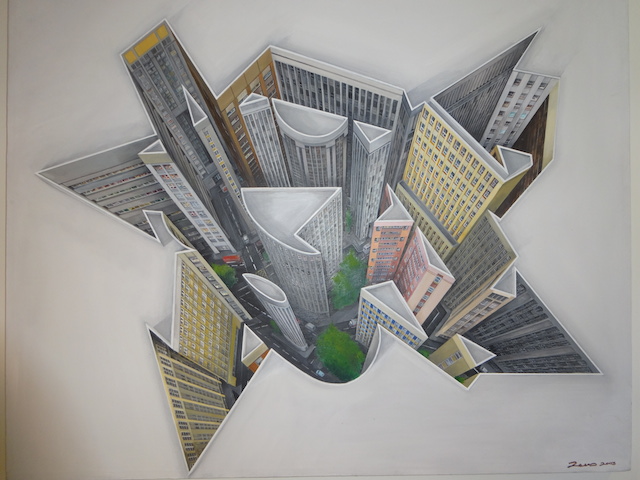 Now a tongue in cheek look at the Governors Estate, Eleuthera Art Appreciation society – 2 members so far – Bob and myself – plus hopefully some of our renters.  Sometimes trying think of what to blog about can be frustrating – mostly it is about the island of Eleuthera and what goes on here or about our travels. But this week I had to order some new artwork for 2 of the bedrooms in the Yellow House and it got me thinking about the some of the stories behind the artwork we have in the rental houses and apartments here at Governors Estate.

When I work with clients decorating their houses I like to try to encourage them to choose pictures that tell something about their interests and are a subtle statement about their lives……. So how does that relate to the pictures we have in our houses ?

So in Tops – the 2 bedroom house – we have in the main living area an original canvas by Bob’s nephew Dean Zeus Colman. He used to be a street tagger – or graffiti artist – but after studying at Chelsea College of Fine Arts in London – he refined and perfected his style and is now a successful and internationally known artist. He has an amazing way of painting downward looking perspectives and you can spend a long time fascinated by the detail of looking down through high buildings in cityscapes. Check out one of his latest works on a New York rooftop through the Facebook link by clicking on his name highlighted earlier….

Also in Tops we have a couple of pictures of framed stamps – we took a trip a couple of years ago to visit our dear friends Clements and Nancy Von Merveldt in Virginia. I went to the Post Office to mail some cards and saw some great commemorative stamps of Hollywood movie stars. So I bought 6 of each featuring Gregory Peck and Katherine Hepburn. Then I took them to Nassau Glass to have them framed – small stamps in the middle of a big frame – I love them !

Artwork doesn’t have to be too precious or expensive either. When I travel I like to stock up on cards for all occasions and on one visit to London I found a great series of cards featuring the official logos from various years of the Olympic Games. I kept those and eventually had them framed and they now hang in the kitchen at Tops…….

In the Yellow House and in Sweetcorn House we have a few large framed prints by a Swedish artist called Kurt  Bjernevi. He was a strange character. We first met him in Skane in southern Sweden with great friends Leif and Gunilla Almqvist – in an art week festival – he later came to visit us when we lived in Oxford. We loved his work and decided to stage a small exhibition in our house one evening. People were liking his work and all was looking promising for sales until Bob invited him to say a few words about his work – big mistake !!!  He began rambling about the ancient Sumerians and extra terrestrial visitors who inspired his painting. Everybody took a few steps back and quietly disappeared realizing that in fact he was barking mad – so guess what Bob and I finished up buying quite a lot of his work !

Bob has always had a great eye for art and his son Cassius Colman has inherited it. Along with his beautiful girlfriend Jessie Dyer they own a very successful gallery called Nelly Duff in the uber trendy Columbia Road in East London. We have quite a few of their limited edition prints in our office and our own home as well as a great piece in the Yellow House by a Brazilian artist called Flavio Morais,

Try it yourself with pictures on your own walls –  it is so easy to stop really seeing what is there – take some time and bring back some memories !