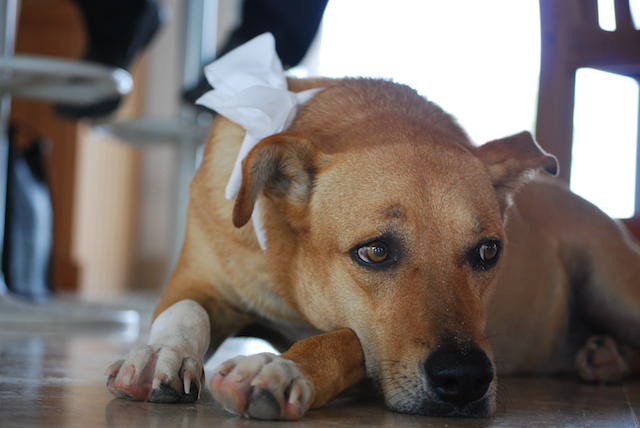 So any of you who have ever rented our homes here at Governors Estate will have met Joe Louis – our communal dog ! Well he belongs to us really but makes friends with everyone and thinks that his role in life is to take the temporary place of anybody’s long missed pet.

He is a potcake – the Bahamian name for a mutt –  a mongrel as we English call them – or as Wikipedia puts it – a mixed breed dog from the Bahamas. They get their name from the rice and peas mix that is left in the bottom of the pan when cooking the traditional dish – it is put outside the kitchen and any local dog would come and eat it – hence the name …..

We took Joe in as a tiny little puppy – probably only about 5 weeks old – just over nine years ago. I went to the Island Farm to buy some salad greens and saw him there – and was told that he definitely needed a home – otherwise his fate was not a good one ….

We called him Joe Louis – the brown bomber – after the famous boxer …..

He will be a yard dog I said – ha ! – even from that very first day he managed to get his way and spend the night in the house of course – and has been there ever since.

He has always been a digger on the beach ………

Joe is shameless around food – anybody would think that we never fed him – even going so far as to eat the breakfast of one of our workmen who put it on the floor and walked away on a job down the hill.

8 thoughts on “Joe Louis – Our communal dog at Governors Estate !”