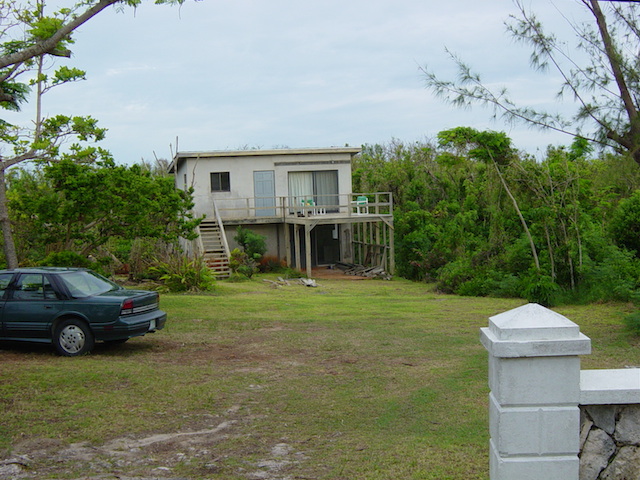 So here is the story of the renovation of the Peach House here on Governors Estate, Governors Harbour Eleuthera.

Now it is an attractive – if I say so myself !! – building with two one bedroom apartments but back in 2004 when we first moved here it was a sad and dilapidated converted water cistern with 2 studios – one of which was used by the former owner Mary Smith as an artist’s studio.

Back in early 2005  we decided to extend the building and make two apartments each with a separate bedroom and a spacious living and dining area.

Audley Meadows from Tarpum Bay was our contractor working in close partnership with ourselves….

Firstly the roof was removed along with the rotting decking and the old windows and doors were taken out.

Next the new addition of the front extension was added and the roof put on.

Next came fixing the wooden sidings and to make this easier the upper decks on 3 sides were constructed along with twin steps up on each side.

Windows and doors were fitted along with all the exterior trimming and painting to bring it this stage – we always buy our paint for all of our projects here on island – from Marc and Sophia Coeffic at Paint Paradise in Palmetto Point.

Interiors were fitted and have been upgraded over the years – see the Homes section on the website or Video tours to see inside…..

but here are a couple of pictures anyway !