This was Halloween in Governors Harbour 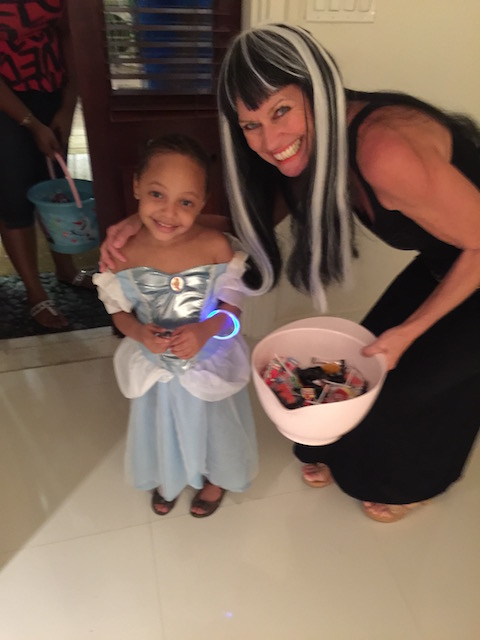 Halloween always surprises Bob and I – in the UK it is not really celebrated in the same way as Halloween in Governors Harbour is ! This year we were pretty well prepared. During a recent trip to Florida we stocked up on hideous tooth rotting candy, our animated dog skeleton as well as various decorations to festoon the front of the house with. Oh yes – and I bought a wig – a touch of the Cruella De Ville’s !

Haynes Library held their usual party on Saturday late afternoon and then The Leon Levy Preserve had a fabulous Spooktacular party as well.

Our visitors started arriving at around 7pm – word must be out that we have plenty of treats – this year we estimated that we have between 40 and 50 trick or treaters…..

Some of the costumes were really good – and it is always shocking to see how much candy has been collected. How do any of these children have teeth left by Christmas ?

When I was a child in the UK Halloween was not something on our radar at all – and even when we left eleven years ago we never ever had visiting children. Our big childhood celebration at this time of the year was Bonfire Night – on the 5th November. This was a celebration that started in 1606 – the year after Guy Fawkes and a team of conspirators tried to blow up the Houses of Parliament in London. Check out the article in the Telegraph here to read more of the history of it all…..

There would be a huge bonfire on the field behind where we lived – all the local kids would avidly collect wood to build the bonfire with. Then we would make a communal Guy Fawkes – this was a figure stuffed with newspaper so that he would go up in flames easily.

Prior to the night of November 5th we would tour the local neighborhood knocking on doors and asking for ” A penny for the guy ”  This would then be pooled to buy fireworks. Of course looking back the fireworks then were pretty paltry – but we loved it – sparklers, jumping jacks, rockets, bangers, catherine wheels – who could have realized how spectacular firework displays would become….

On the night of the 5th a group of fathers would supervise getting the bonfire lit – and we would all jump up and down at a distance warming our rosy little cheeks in the always cold weather ….

The role of the mums was to provide the food – baked potatoes were a firm favorite – well with me anyway ! And roasted chestnuts – heated in the embers of the bonfire on a shovel and then pulled out and peeled – I always managed to burn my mouth on them ! Heinz tomato soup in mugs and sausages – seemingly a strange combination but it worked !!

Funny how these blogs take their shape – this was only going to be about Halloween here in Governors Harbour but I got sidetracked wandering down memory lane ! – sorry no photos of those times – although my late father was a keen photographer outdoor night-time photos were never in his repertoire !

8 thoughts on “This was Halloween in Governors Harbour”