A week in Governors Harbour Eleuthera 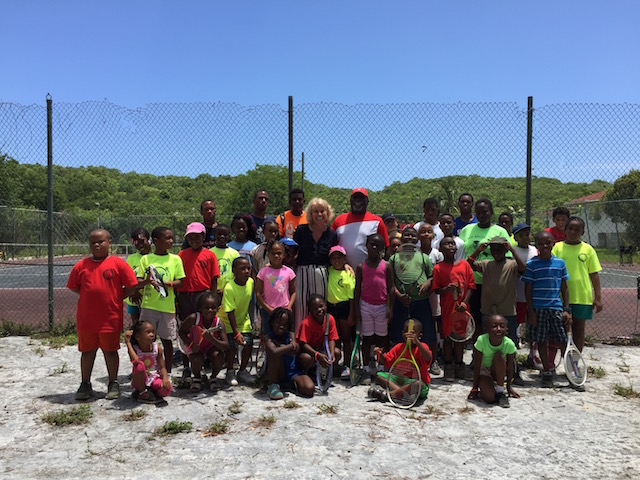 This week in Governors Harbour I was asked to go along to the annual tennis camp that Artie Johnson organises – this is the 17th ! – to give a short talk to the young participants about living a life that is happy and successful ! – no pressure then ……

It is good to think about these things from time to time. I believe that we can all benefit from a short contemplation about our own lives – what we have learned, what we aspire to and what we want to share with others with regard to  living a full and happy life…….

The age range was from around 5 0r 6 right up to 16 and in total there were around 40 students. Artie does a great job coaching them all without enough rackets, balls or courts to go around.

As the age range was so great I decided to make it an interactive experience – plenty of questions and answers. The first important point I made to them was about staying fit throughout their lives – taking some form of exercise and eating healthily. They had been pretty well educated about eating habits – I was impressed with what a lot of them knew – eating fruit and vegetables – especially greens ! What I did tell them was to eat most of what they liked – in moderation – but to try to avoid drinking sodas. What I have learned through all the years of my involvement of teaching fitness is to never totally ban any particular food. Nothing is guaranteed to make you crave it more than to be told something is forbidden !

Next I talked about choosing to do something that you really enjoy. I have met so many people over the years who have very well paid jobs but who just hate what they do …. Where is the wisdom in that ? If you can manage to steer your career into a field that you love then how much better is that than waking up each day and going off to work with a heavy heart. I asked the group if any of them had an idea of what they would like to do and the answers were fabulous – varied and imaginative and plenty to aspire to ……. I particularly loved the answer from a small boy ,aged around 6 I would imagine, who told us all he wanted to be a secret service agent and work for the FBI !!!!!

Aspirations and dreams are a vital part of all our lives and are often something that as we get older fall by the wayside. But I truly believe that we need to continue to have them as an active part of our imagination. I remember a particularly inspirational 90 year old lady who came as part of a rental group to one of our houses who spoke to me of her ambition for the future to write more – superb !

Which brings me neatly on to the subject of my nephew – Sam….. He is a sports coach and teaches at a couple of Primary Age Academies in the Northampton area of the UK.  Like many people he watched the England vs Iceland soccer game last week – and was appalled by the defeat of the English team. So was the England manager who resigned as a result of the abysmal performance. So Sam wrote an email application for the position of the new England manager to the Football Association. It was a well written and humorous application. The principal of one of the schools forwarded it to the local newspaper as well as publishing it on Facebook. it just took off and went viral – and culminated in a local TV station going along and interviewing Sam and some of the children he coaches. When I spoke with Sam he felt it was getting a bit out of hand but I said to him that it is a great example of following your passion and acting on it. The bookmakers in the UK have him as an outside bet of 1000-1 as the next England manager.

So follow your dreams, be daring and brave no matter what your age is. One of the older male students at Artie’s camp asked what is the secret to being successful !!! I answered that it was daring to try and when you failed – as we all must do at times – then to pick yourself up and try again ……..

PrevGovernors Harbour to New York City !
Upgrades at the Yellow House + a christening !Next