So already we have celebrated Easter 2017 here in Eleuthera – is this year going quickly or what ? This week I am reporting on what has been happening for us here – plenty to enjoy and celebrate.

Firstly we had our Pizza Party with the Exceptional Learners at Tippy’s …. We have had these parties 3 times a year for the last 4 years and this was the first time ever that we had to have it inside – it was so windy that the pizzas would not have stayed on the plate ! We had the students, the teachers, the assistants and the visiting student teachers – plus Bob’s son Cassius and our 3 grandchildren.  So quite a crowd……. and quite a lot of pizza ! I told our grandchildren, Indi, Vivi and Alba that at the start of every yoga class with the children I ask them all to tell us one thing that they are thankful for. Gratitude is a great practice and throughout their stay I kept on asking them to tell me at least one thing each day that they are thankful for – I really hope that they keep it up. So very important to be aware of the gifts we have and not to always be thinking about what we don’t have !

The next day we all drove down to Wemyss Bight to attend the opening ceremony for the fabulous basketball court and climbing wall so generously donated and installed by Mr Dougie Douglas – grandson of Juan Tripp the late owner of Pan Am – who did so much for the development of South Eleuthera in the 60’s and 70’s. It was a joyous occasion and after all the formalities of the opening it was terrific to see the court  being used by the all the local basketball players…… 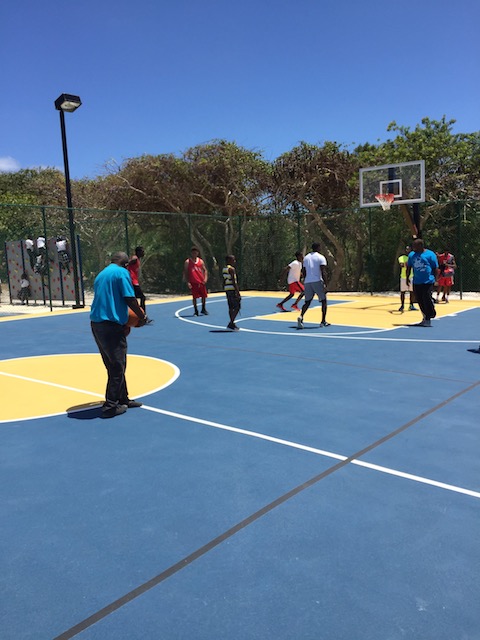 Later in the week we had our very own pizza party at the Yellow House – where Cass and the children were staying …. Good friends Dan and Larry from Cupid’s Cay gave the children a masterclass in making the pizzas with Dan doing all the cookery side and Larry giving moral support ! It was a fun evening and we all ate way too much – but that’s what parties are for don’t you think ?

On Saturday the family all left – boo-hoo – and in the afternoon Bob and I went to the pop-up art show here in GH. I bought a great piece of original art by Abrian Rankine which I am admiring as I sit in my office and write this !

Later in the week we are off to Fort Lauderdale for a few days – lots of furnishings to sort out for the properties we have renovated at the bottom of the hill – but of course you know that there will be plenty of food featuring in next week’s blog !

One thing which has made my list of things to be grateful is the re-opening of the now repaired road that runs around the harbour – so lovely to enjoy that ride along the edge of the water – now what are you thankful for today ??????