Tales from Governors Harbour in May 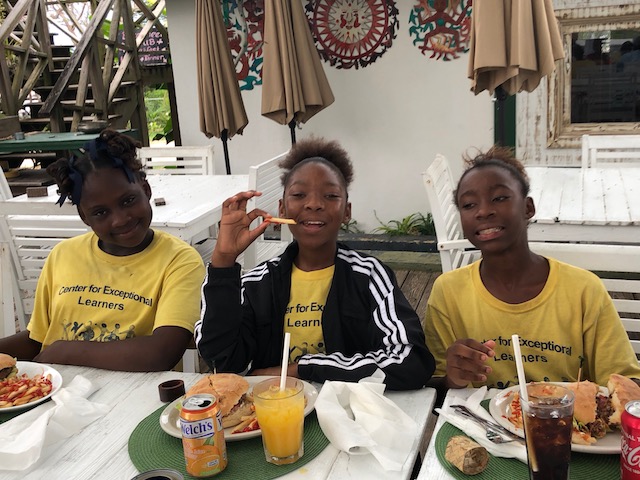 So this week a few tales from Governors Harbour and the last tale – for now – from New York. The weather has been very unsettled for the last 10 days or so – lots of rain which of course we do welcome. Very overcast and gloomy a lot of the time and the rain has been off and on all day which is unusual – we normally get a heavy downpour and the sun comes out again. So this meant that plans for the 60th birthday party for Katherine Johnson – of Buccaneer fame – had to be adjusted.

The family decided to rent Cocodimama so that most of the party could be held indoors if the rain came down. In the event Saturday night was dry – but it was a really good idea to have it there instead of at a totally outdoor venue. Plus they had the site fogged – the mosquitoes are really bad because of all the rain – so that was a major bonus.

As I sit writing this I am scratching away at mosquito bites after taking Rudge for his early morning walk around the garden !

It was a great party – plenty of people, a great bar, plenty of lovely food to eat and a great band. Mahershal Simonet – who I wrote about the other week – come on you have to keep up ! – put in an appearance and joined the band for an impromptu session with him playing the washboard ! It was a sight to see – he finished up on his back on the floor at one stage . Katherine is a great sport and rose to the occasion when Mahershal placed the washboard over her shoulders – she played along and then also sang with the band as well. A great night ! Don’t forget to wish Katherine a belated Happy Birthday if you see her in the Buccaneer….

The Buccaneer was the setting for a lunch we hosted  for the students from the Exceptional Learners Center. Because of my trip to London a few weeks ago – you missed that on as well ? – you have to do better ! – and a lot of work commitments – we had missed out on the end of term party we usually have. So we caught up this week and also celebrated the success of the team at the Special Olympics Bocce Ball Tournament. It was a great lunch – the rain held off so we all sat outside and the students were particularly well behaved.

Now my final tale from our trip to New York. Regular readers will know that I love to find the lesson in things that happen in life and this tale has 2 ! I am going to do this the wrong way round and tell you the lessons I learned at the beginning instead of at the end.

Firstly – recognize that we can all be guilty of weighing up a situation and coming to the wrong conclusion – most of us are guilty of that at sometime – talk it through with your therapist – I don’t have time right now !! Our preconceptions – no matter how enlightened we think we are – often get in the way of really seeing what is there.

Secondly – seize the day and act on an impulse – the last part of the tale is about my only regret of the trip !

OK so here is the abbreviated version of the tale – otherwise we would be here all day.  Bob and I took a yellow cab to Brooklyn to visit the Moniker Art Show where Cass was exhibiting.That day there was a bike race and many of the streets along the waterline in Brooklyn were closed because of it. The cab driver dropped us off telling us that he couldn’t get any closer with vague directions of where to find it. In fact he had taken us to the wrong place we discovered – I can’t believe he didn’t understand my accent !

So we walked off – I had just bought a new phone and the Apps had not finished downloading – so no Uber ! We walked along – not seeing a yellow cab at all – until we reached a point where we saw a NY cop standing outside a foodstore – Yikes I thought – this looks a bit rough. There was across the street a line of young guys – real boys from the hood sort of thing -along with a security team – at first a pretty intimidating sight. I asked the cop where we could walk to to find a cab – he didn’t know and directed us to talk to the security team …..  They turned out to be the sweetest and kindest people ….. The female member of the team said that she would call us an Uber on her account and we could pay her the cash – $6 !

So while we waited we chatted with both the team and the guys on the line – it turned out that they were queuing for a sale at the Supreme store – no I didn’t know either ! – a trendy young sporty type clothing store where they sell limited edition pieces which a lot of the purchasers then re-sell on eBay at huge profit.  While Bob was in conversation with the Russian security guard ! – I chatted with the guys in the line. The all had hoods up and dark glasses – but they were soon chatting and having a laugh with me.

So all my preconceptions were wrong about these people and what was going on – and my only regret was not getting a picture with them all ….. I do love a good life lesson – and here I got 2 for the price of 1 ……..

And finally a picture I particularly love of me with Dominic – a guest with his family at Sweetcorn House. Dominic – I think I am correct in saying skis for a team from the North east of the US in the Special Olympics – so I was delighted to get my hands on a Special Olympics Bahamas T shirt for him…..

PrevFrom GHB to JFK and back again…..
Two new kitchens and a Royal Wedding !Next

8 thoughts on “Tales from Governors Harbour in May”