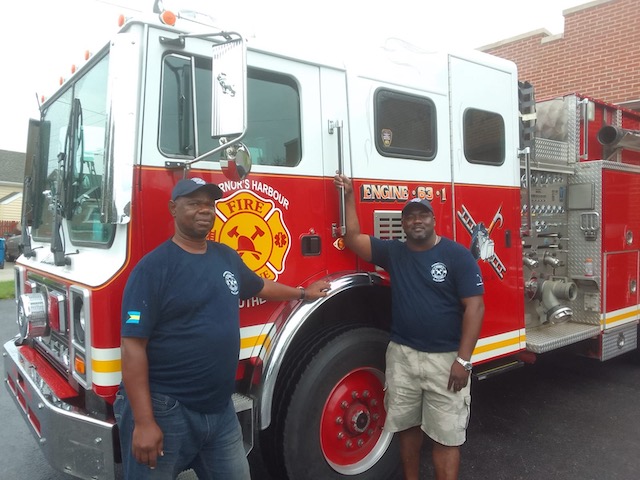 Two of the members of the Governors Harbour Fire and Rescue Department took a trip over to the US to be trained on the actual fire engine that has been purchased for Governors Harbour. They were coached by the fire team in Loganville Pennsylvania  who will be making a trip over here later in the year to demonstrate the engine to the whole team.

The truck is now on it’s way down to Bimini Shipping in Miami along with 7 pallets full of firefighting equipment donated by the Canadian ‘Firefighters Without Borders’ – a non profit organization who are very generously supporting the initiative.

Ricardo Pinder and Dion Johnson had a good time – marred only by their return flight being cancelled and having to make a taxi dash to another airport to catch a flight back home.

There will be news to come of the launch of the fire truck once it is here on island…..

Last week we took another quick trip to Fort Lauderdale – dental appointments and other such exciting commitments necessitated the visit.

We stayed at the Conrad Hotel again – we both like having what is essentially a small apartment with all the benefits of a hotel. Breakfast of what you want as opposed to my usual habit of overeating when in a hotel is a good way to start the day. A quick trip to Publix to stock up on fruit and cereal on the afternoon we arrive means that the start to the day is relaxed and sensible.

I know I have told you all about it before but a flight with Aztec Airways makes the journey quick and simple. And car rental from GoRental where they have the vehicle waiting for you at the Customs Building is absolutely ideal.

We had a couple of really great meals – one at an Italian restaurant on US1 called Casa D’Angelo and one at Takato – the restaurant in the Conrad Hotel. I have lost my own cooking mojo at the moment – not sure why but it happens to many of us at times and hopefully it will come back sometime soon.

Flying back on Saturday to GHB we were the only the 2 passengers – so it was a bit like having a private charter but without the expense ! I love that we only have to be at Aztec one hour before departure and also that we leave the car outside the Aztec terminal and GoRental just come and pick it up. I hope this easy way of traveling continues for some time – I know nothing lasts forever but this set up suits us so well.

Sunday was actually Independence Day here in the Bahamas but Monday was an official Public Holiday and so we benefitted from not having to go straight back into the office.

Down at Sprawling Towers we have started on putting the kitchen units in place. Still waiting for a couple of missing ones so the island is not set out yet or the cabinets in the slut’s kitchen. But we can see the shape of how it will be and it is very exciting.

Jane , my sister , arrives on Monday next week so of course I am holding my breath until she gets here…. So many flights are being cancelled or delayed around the world that until I see her on the ground right here it will be a nail biting time ! Of course Mary , my Mum , is also really looking forward to seeing her as well as Jane’s son Sam and his girlfriend who are arriving in early August.

The weather is sizzling – but at the moment the temperature of the sea is not too warm – let’s hope that it stays that way and that it keeps the big storms away.

Have a great weekend and be a friend where you can ….

PrevMichele Johnson – wishing you the happiest birthday
Lots to be thankful for in Eleuthera !Next