A great party and more tales from Governors Harbour. 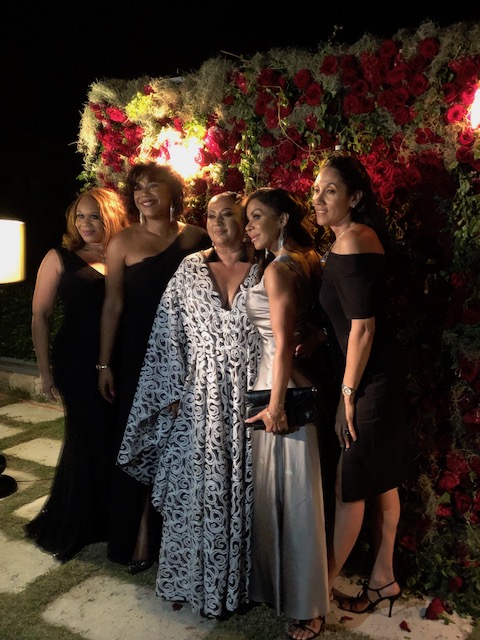 So this week there is lots to tell you about a great party in Governors Harbour, a car upside down in the harbour, news on Jack’s Bay and a brilliant craft company in Kenya !

First the party – it was Angelika Bacchus’s 50th and boy does she know how to throw a party ! Here in her own words is Angelika’s vision of how the party should be….    ” My inspiration – Chanel – but of course …… I wanted an enchanted garden on the beach with everyone dressed in gowns and tuxedos because how ridiculous would that be ! Spanish moss, orchids, roses and chandeliers on the beach ! I wanted a jazz band and I got Supercurl …  And I wanted Cirque Du Soleil ” – more of which later …..

So the setting was the grounds of Lush Life – the Taglich House on Banks Road – the whole affair was staged by Mish and Zev from Boy Meets Girl Weddings – Eleuthera – it was sensational. Everything was so beautifully styled and staged – if you want to have an event in Eleuthera then these are the people ! The table looked stunning and instead of Cirque Du Soleil performing we had Mish take a graceful balletic sashay down along the table between courses – she did not so much as knock over a single glass or trample the flowers – it was a treat to see !

The band Supercurl are from Berklee College of Music and of course included Yanni – Angelika’s son who is studying there. They were brilliant – they played for 2 hours while the 50 plus guests all sipped champagne around the pool and nibbled on tasty appetizers – while at the same time posing for photos in front of the flower wall – studded with red roses. This was a great touch and so impressive that nobody could resist posing in front to it for a few shots…..

The night was pretty cool and breezy so when we all sat down for dinner I was very pleased with myself for having put a short little sheepskin jacket in the car. By now it was around my shoulders….

Angelika had a sensational dress specially made for the occasion by Rex fabrics in Miami – it took 3 months to make but was an absolute showstopper. Everyone really dressed up for the occasion and it was a joy to have such a special reason to glam up ! The men looked great in tuxedos and the women’s dresses looked fabulous.

Bob and I left a little after 12 – tired and jet lagged – but the party carried on until around 4am with Supercurl really letting it rip !  So huge thanks to Angelika for having decided to celebrate her birthday with such style and inviting us all to such a night to remember….. Oh yes – there was Junkanoo between courses of the meal as well…..  Of course it took us several days to recover but it was so worth it !

Excitement of a very different kind when on Friday morning last week a car ran off the road in Governors Harbour – flipped and landed on it’s roof …. Fortunately the driver walked away without a scratch – don’t ask me how. Jason Thompson came out with his crane and took only 20 minutes from start to finish  to hook the car out , turn it up the right way and load on the truck. A brilliant bit of work …..

Lastly I want to tell you about a great set up called The Kenyan Crafts Company. When we were in London, Bob’s daughter gave me a lovely shoulder bag and a set of 3 baskets all made in Kenya by a group of Kenyan women using a weaving tradition called Kiondo.  Zippy is the remarkable native Kenyan woman living n London who has made this a successful company. It continues the tradition of local weaving techniques as well as providing a self help group of women with a source of income.

Do click on the link above to read the story and see the beautiful goods they produce….. And thank you to Sami for giving me such great gifts……

And this is the final final bit ! They are laying the sod on the golf course at Jack’s Bay and it looks really good. More up to date pictures next week I hope of further progress …..

5 thoughts on “A great party and more tales from Governors Harbour.”