What a week in Governors Harbour ! 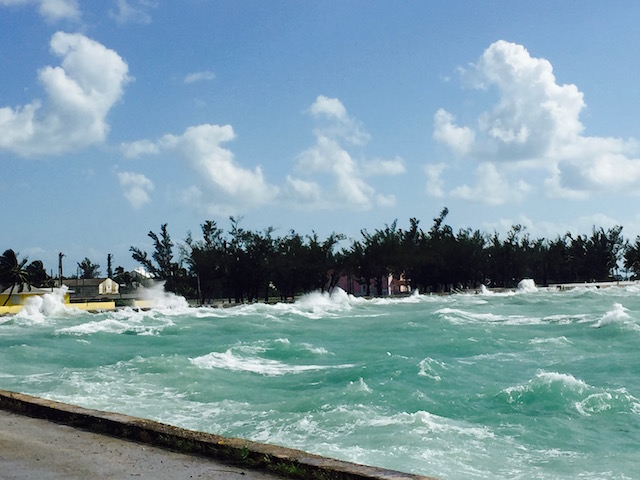 Well – what a week it has been in Governors Harbour ! At the end of last week’s blog I was saying that we were watching, waiting and preparing for the imminent visit of Hurricane Joaquin. We went to bed on Wednesdy evening with Tropical Storm Joaquin heading our way – but when we woke up on Thursday morning he had bigged himself up to a Category 3 – heading to cat 4 full blown hurricane.  Very , very scary indeed.

So the preparations took a big step up. EVERYTHING outside for our 3 rental houses, the apartments , our house and my Mum’s house had to be put away – that is quite a lot I can tell you. The new shutters on the Yellow House were all closed up, along with the shutters on our 250 year old house – screwed shut and fastened tight. By Thursday afternoon everywhere in Governors Harbour was pretty deserted. Being in our house was gloomy and dark – the only natural light came from the hurricane rated sliding doors and the kitchen window. All the other windows are very old and the glass panels just get blown out in the storms so they have to be shuttered and this plunges the rooms into darkness.

Bob said it felt like Christmas Eve but without the presents the next day – the sense of anticipation is very weird. you are bracing yourself for the worst……. So the winds got up a bit but nothing too much. We went to bed – I took a sleeping pill hoping that I would sleep through some of the worst of it during Thursday night – but of course it never came….

I woke up during the night and was amazed at the quiet – no sound of a storm at all – bizarre. So Friday was very cloudy – some rain and some winds – but nothing in the scheme of things. The weather forecast was telling us it had turned for the north and was going to totally pass us by. Of course what happened was that it sat over the more southern islands of the Bahamas venting it’s wrath for two whole days. Long Island, Crooked Island and Acklins all took a terrible bashing and have some awful work to get through to restore life to normal again.

Here in Eleuthera we were so incredibly relieved to have been spared this time……. Saturday and Sunday the sea was very rough and it felt like it was too risky to really believe it had gone.

I kept on remembering stories of hurricanes that had passed by and then turned around and come back for a second hit – what a nightmare that would be. By Monday however we all realized that it really was gone – so the shutters were opened and everything was put back outside.

Tuesday we took a trip to Nassau to meet up with some of Bob’s family who he hadn’t seen for around 20 years – don’t ask – it’s too complicated to explain. They were on a cruise that docked in Nassau. Peggy and Derek Watts – what a great time we had with you- and just the tonic we needed after the drama of Joaquin – or he who will not talked of again !!

First thing after landing in Nassau Bob grabbed the opportunity to have a treatment with his very talented chiropractor Michael Pyfrom. Michael is always a delight to see and he and Bob had a great conversation while he was launching him this way and that and  putting everything back in place – plus of course they agreed to letting me take some pictures. Very little in our lives remains private since I started writing this blog !!!  Michael’s centre in Cable Beach is called Family Island Chiropractic Centre – highly recommended. Also check out their Facebook page

Anyway back to Peggy and Derek – we met them outside the cruise port and had a slow stroll – talking of course all the time – until we reached our favorite restaurant in downtown Nassau – Cafe Matisse. We had a long and leisurely lunch with some lovely reminiscences about Bob’s late Mum – Emma – as well as many other members of the family. I love these sort of meetings – hearing family legends and myths and learning all sorts of tidbits that make you laugh out loud. ( Peggy you know my favorite one involved a tape recorder and you !! )

Back on the afternoon flight – a day trip to Nassau is enough ! and home sweet home again…..

7 thoughts on “What a week in Governors Harbour !”