Yes – this last weekend saw our own 95 year old in Eleuthera celebrating her special day in style ! My Mum believes – as I have said before – that your birthday should be a very special day – it is a feeling that comes from your own belief – not necessarily something that others do for you – if you don’t believe it then no matter what other people do it will not make you feel cherished and special.

So with Jane over here , we cooked a sit down Sunday roast for 15 people. I hired 2 tables and all the chairs from Judy Simmons and set them up in the house – our dining room is not big enough to seat that many people so this worked very well. We started the preparations on Friday with Jane cooking a big bowl of red cabbage – cooked with grated apple, chopped onion and wine vinegar plus a little sugar. It is even better when it has sat in the fridge for 2 days …. 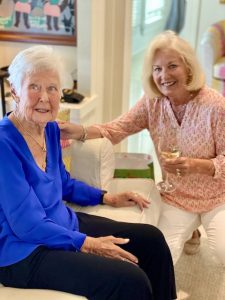 I warn you now that a lot of this blog is about the cooking of a great roast dinner – so if you are not that interested in cooking  – well maybe just look at the pictures !

On Saturday we made 2 big bowls of cauliflower au gratin. Well I cooked the cauliflower and Jane made a fantastic sauce.  Her top tip is to infuse the milk with a halved onion – as it warms through the onion imparts just a touch of flavor, then use a good cheese and a fair sized dollop of English mustard to make a super tasty sauce. Warm it through before you are about to serve it and top it with a good grating of parmesan cheese and brown under the grill. Oooh yummy.

Jane cooked the 3 chickens in the oven in the apartment at Peach House – start them off breast side down in a shallow bath of stock and white wine at a reasonably low temperature. After about 45 minutes to an hour turn them over and allow them to cook thoroughly. You can turn the temperature up to brown the skin – then allow them to rest for 30 minutes before carving. 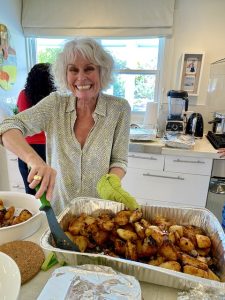 I concentrated on the roast potatoes. Now anyone who knows me knows that I love roast potatoes – and we are talking about a deep and abiding love here. So here is how to achieve delicious roast potatoes. First peel and cut them up – I don’t like them too small personally – then boil them in plenty of salted water for about 10 minutes. Strain them and shake them around in the saucepan to rough up the edges – this – along with the next step is what makes them lovely and crispy on the outside. Then toss in a little flour to lightly coat them before putting them into a large tray with hot oil in it. I use canola oil because it doesn’t burn at a high temperature. I add dried herbs to sprinkle over, chopped onion and whole garlic cloves for added flavor. Then roast for at least 90 minutes in a high oven. I have mine set in degrees Celsius which I know people in the US don’t use – and mine is a convection oven as well. So I set the oven at 195C – if you are not using a convection oven then it needs to be a higher temperature – so maybe around 400F – but do check it out yourself. You need to turn them a couple of times and baste them – you can tell by the look of them when they are looking good – near the end I drain off most of the oil from the pan and give them a good shake up and put them back for another 10 minutes while the chickens get carved.  Then serve them up with the dark brown or blackened onion – and make sure you have done enough to eat some cold for breakfast the next day !

We served carrots , peas and broccoli as well so it was a colorful plate as well as tasty – and of course Jane’s secret recipe for the stuffing of which I can divulge no details !!!  I made the gravy the day before from homemade chicken stock which I had in the freezer from the last chicken I roasted. I always make stock in the pressure cooker after I have finished with the carcass.

Carving the chickens can take a while so my top tip here is to invite Angelika and Sandy from BFF to the party and they will expertly carve the birds while you faff around getting everything else ready !

And so we all finally sat down and enjoyed the meal – some of us having seconds and even someone having thirds  – and amazingly it was not me ! 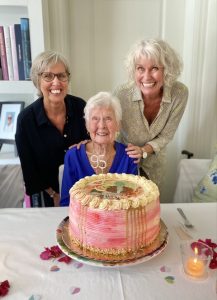 I had Tanya Knowles from Mo Sweet’s Bakery make the birthday cake – pina colada flavor if you want to know – with a gold drizzle and a picture of Mum from last year’s party printed on rice paper to go on the top. Plus a couple of dozen cupcakes as well. Jane had brought sparkler candles over with her which was a fun final treat. 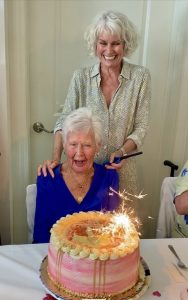 Cooking with my sister was a really lovely treat – we had a lot of fun even though the poor thing had jet lag ! We were both absolutely exhausted afterwards but I’m sure it was worth it. 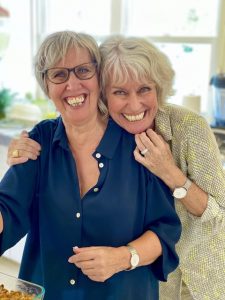 We bought Mum an Apple watch for her birthday so she is now getting to know what that all entails – the main thing is that if she falls she can press a button and it calls the police station here on island – I know because I got through to them whilst I was demonstrating it. They were very good natured about the false alarm and said that it was a great feature. It also automatically sends me a message to say that the emergency services have been notified so I can hot foot it up to her….

OK so enough of talk of food this week – have a good week and stay safe.

PrevBottles and Boards at Bacchus Fine Foods on a Wednesday evening
And the darned virus is fixed !Next

2 thoughts on “95 Years Old in Eleuthera- A Birthday Party !”