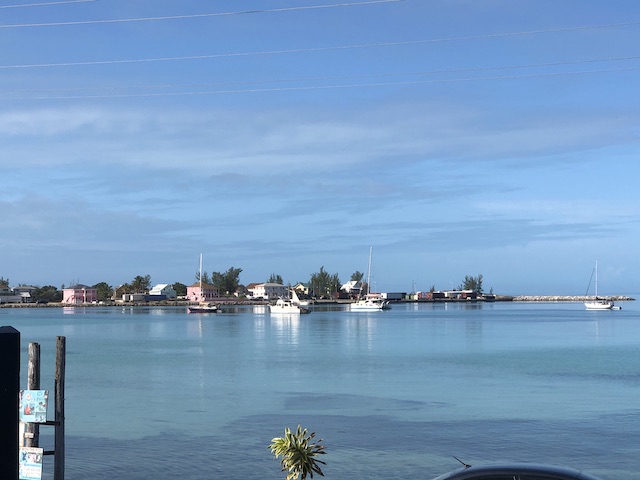 So first news of the week is that there is an official case of Covid here in Eleuthera – we made the Bahamas chart in a way we never wanted to – and then reminiscences from me of childhood holidays !

Not really any major news about the Covid case apart from saying that it has obviously been brought in by someone who has either been mixing with other Bahamians who have been carriers – it is a Bahamian native – or have mixed with visitors somewhere who are carriers. Not my job to have to track it all down !!

In the light of us being in lockdown, everywhere is closed apart from food stores which are open Monday Wednesday and Friday – there is very little news to pass on to you. So I was musing about what to write about this week when I took a look at some photos that my sister Jane had sent me of a short trip she took to where we spent pretty much most of our family holidays when we were children ….

So here we are – a trip down memory lane for me and a few little anecdotes for you !

The place we always went to for our summer holidays – I can call it a vacation when it is something we are doing these days – but for childhood stuff it is always holidays – was a small peninsula in South Wales called the Gower. It has beautiful beaches – certainly not the color of Bahamian beaches – but beautiful nonetheless.

My father was born in Swansea – the nearest town to Gower and it was where my Grandmother lived. So the first night of the holiday was always spent staying in her house. The sounds and smells of that house are still so strong in my memory even though we are talking about memories from over 60 years ago ….. She had a piano in her front room – the best room – which was hardly ever used – but it was a rare treat to be allowed to have a go on it ! We all used to sleep on the floor in what was known as the middle room – and it had a clock that used to tick loudly through the night.

Anyway – after the first night we used to set off for the short drive to Gower – and the camping site where we spent the rest of our 2 week break. Let me just put you straight – I hate camping – I never enjoyed that part of the holiday – again the smell of a fusty tent which had most likely been packed away when still wet from the inevitable rain used to make me feel sick – and I used to suffer from travel sickness so it was a double whammy ! The sleeping bags too were not the freshest smelling of bedding – I think you get the picture !

But the days on the beaches were something else – when the sun shone – which it often did – they were such fun. We used to have a favorite few that we visited often – and a few more inaccessible ones that were a highlight on special days with us all traipsing down steep hills to get our patch set up on the sand.

Sometimes in the early years we would holiday with another family and they were the times when my parents would organize beach olympic competitions – hilarious and hopeless in equal measure. As you read this you will get an idea just how strong my sense of smell remains after all these years – Mum would cook sausage sandwiches on a small burner on the beach – and yes they really did have sand in them often as the winds would deposit a small dusting of it in the frying pan. But what I remember about those beach picnics was the awful smell of hot drinks in plastic cups – they were a sort of polythene – which gave a vile smell – well it seems only to me – to anything that was in it !

Sometimes it was like being sandblasted when the winds whipped up the sand on the vast beaches – legs and eyes would sting with the force of it – we would be wearing sweaters on these cold windy days – but a trip to the beach was a given – whatever the weather !

So like all childhood memories a mixture of good and not so good times – good times always included a trip to Dick Barton’s fish and chip shop at Mumbles – which amazingly is still there – look at the pictures Jane took a couple of weeks ago ….

OK – I’d better stop now dear readers before I have written an entire book instead of a blog ! But reminiscing – especially with my 2 sisters is a fun thing to do – and we all realize how lucky we were to go every year to a place of such absolute beauty….

Take care of yourselves, keep safe and be as kind as you can to each other….

PrevHurricane Isaias, lockdown and the grand unveiling !
A birthday and a trip to the dentist – but not on the same day !Next

6 thoughts on “First Covid case in Eleuthera and childhood holidays”